Over many years the world has seen the rise in poker and it’s variants, one of them being Blind Man’s Bluff poker. Blind Man’s Bluff is a variant of Texas Hold’em as it follows the exact same rules with one major twist – players are not allowed to see their own cards.

This game puts a fun and creative edge on the standard game of poker and allows players to make their decisions on whether to raise or fold based on the actions of the other players, hence the name Blind Man’s Bluff.

In Blind Man’s Bluff each player will take a turn to be the dealer and can be recognised with what’s known as a Dealer’s Button. The dealer then deals each player 2 hole cards face down, however players are not permitted to look at them.

Instead, players would have to place their cards on their foreheads in order to display their 2 hole cards to all other players. Even though players cannot see their own cards, they can see every other player’s meaning they can judge whether they have a strong hand by the moves of their opponents.

Aside from the one difference, the rules are identical to Texas Hold’em and each game begins with what are known as blinds. Blinds are paid at the beginning of each hand by the 2 players to the left of the dealer.

Blinds are small, forced bets that players have to pay in order to start each game, much like an ante.

Once blinds have been payed, all players are dealt two cards they cannot see. Players must then proceed to a betting round where they either call the minimum bet, fold or raise the bet. If there is a raise at any stage, players must either match or fold.

Next, 3 cards are dealt by the dealer, face up, and are placed in the middle of the table. These are community cards and and can be used by players to create any winning hand when combined with their 2 hole cards. Furthermore, another round of betting takes place that starts with the person directly to the left of the dealer. 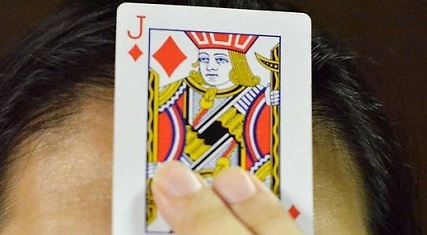 The Turn card is another community card that is dealt face up and placed in the middle of the table, which then brings on another round of betting. If players were playing fixed limit stakes, this would be the time to increase the bets to what is known as the upper betting limit.

The River Card in Blind Man’s Bluff is another community card that is dealt face up and next to the Turn card. This then triggers another round of betting.

As the game draws to an end, usually termed the Showdown, all remaining players who haven’t folded in previous betting rounds are allowed to now look at their hole cards. Players must try to use a combination of their hole cards and community cards to make a winning 5 card poker hand. The player with the highest hand will win the pot.