Joker Wild, also called Joker Poker at some online casinos, is a popular version of video poker, which like all other variations gives fans the chance to play poker without having to compete against other players and raised bets.

Most versions of video poker use a standard 52-card deck. As the name implies, Joker Wild adds a 53rd card, the Joker. As in normal card games, it can substitute for any other card in the deck to complete winning poker combinations. The Joker gives the player higher odds of winning, but Joker Wild offsets this by adjusting the pay table. For example, a natural royal flush has a better payout than a royal flush containing a Joker.

All the different versions of video poker tend to play in the same format. The pay table dominates the top of the screen, the five cards are dealt beneath it, and the game controls sit at the bottom of the screen. In Joker Wild, players can set the credit amount at five levels between 0.05 and 5.00, and they also have 5 credit levels per bet to choose from.

It is advisable to play each hand at max bet, 5 credits, even if the player must choose a lower credit denomination to afford this. Most of the prizes on the pay table increase in simple multiples as extra credits are bet; a prize at max bet is 5X the prize on a single-credit bet. But the top Joker Wild prize, for a natural royal flush in sequence, at max bet increases to 40X the prize for a single-credit bet. So players gunning for the top wins bet accordingly.

Like selecting “Bet” option in the Melbourne Cup betting AU, after setting and placing a Joker Wild bet, the player clicks on the Deal button. The game deals five cards, and the player must click on those they want to hold. Then they press Draw, and new ones drawn from the same 53-card deck replace discarded cards. 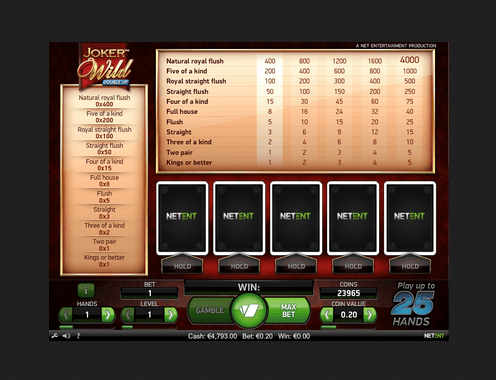 Once the draw is complete, if the player has a pair of Kings or better, Joker Wild pays out according to the pay table. The game also has a gamble function whenever players win. If they choose to use it, players must pick a card and hope it is higher than a card already showing face-up. They can repeat the gamble a number of times; doubling the win each time they are successful. If they guess wrong at any point, however, they lose the whole win, so it is wiser to gamble only the smaller wins, in the hope of turning them into more worthwhile prizes.

At max bet, any pair of Kings or Aces, or any two-pair combos, wins 5 credits. For three of a kind, a straight, a flush or a full house, the max bet prizes are 10, 15, 25 or 30 credits, respectively. Four of a Kind wins 100 credits, and a straight flush wins 250. A royal flush that includes a Joker wins 400 coins, and the Joker also makes Five of a Kind a possibility, which wins 750 credits.