IRC stands for Internet Relay Chat. IRC Poker was a form of poker played over the IRC chat protocol before the surge in popularity of online poker in the early 2000’s.  IRC Poker was purely text based for the first few years of its existence.

Although all play on these servers was for imaginary, or fake money, it meant that any player could log in and receive 1 000 chips per day. The overall standard of play was much higher than the play for real money games that were found on other major online sites.

Due to the types of players and small number of total users on the IRC system, people took the game very seriously and highy strategic poker play was the norm. Between 1995 and 2001, over 10 million hands were played on these servers and these games were additionally also recorded by a program named Observer. All of these hands have been saved in the IRC poker database.

To deal the cards and manage the games, a computer program was used. Commands could be typed in directly with a standard IRC client and point-and-click graphical clients were eventually developed. Games flowed more quickly than face to face games, due to the ability to message the dealer program directly before one’s turn to act.

As there were no restrictions on creating new accounts, some players created multiple accounts and ‘harvested’ the chips in these fake games back in the day.

Players entering the No-limit versions of the game then automatically bought in for the full value of their account. The most successful IRC poker player eventually accumulated over one million chips and often joked about selling their account. Many tournaments started with the theoretical maximum of 23 players at a table and were be completed in less than an hour. A poker playing program, r00lbot, was able to maintain an extremely efficient winning record, which provided many amusing quotes.

Rules and Play in IRC Poker

The game uses the Internet Relay Chat, or IRC, to arrange communications amongst the players and with the dealer. IRC is normally a sort of global virtual party, with several thousand people engaged in small pockets of conversation on various “channels”. Within each channel, anything one person types appears on the screens of all the other people tuned in to the channel, although one person can also ’whisper’ privately to another. The poker channels are unusual and appealing in that an automation is present to supervise a game. However, the chat aspect of the channel is retained, thus enabling the poker games to become quite social. 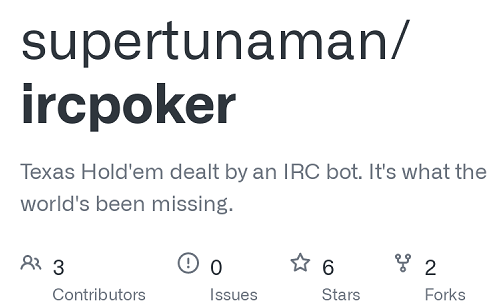 In order to participate in a game of IRC poker, players need to have an IRC client and access to the Internet to play IRC poker. The client is a computer program downloaded and running on each local device that connects the device to the IRC network.